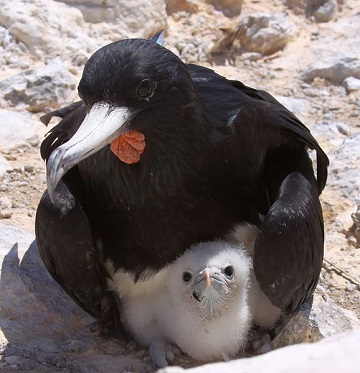 The recent saga of life on Ascension Island is a series of miscalculations. When the island was first settled, in 1815, it was a haven for millions of birds. But colonists also brought rats, which overran the island. So the settlers brought in cats to eat the rats -- which they did. But the rats and cats also ate the birds and their eggs. That decimated the birds, driving at least one species to extinction. But the cats were eliminated a decade ago, so the birds are coming back.

Ascension is the tip of a two-mile-high volcano. The small desert island is in the Atlantic Ocean, just south of the equator. It’s a thousand miles from Africa, and 1400 miles from South America. It’s home to about 800 people.

It’s also home to hundreds of thousands of birds, including seabirds. They nest on cliffs at the rim of the island, or on tiny Boatswain Bird Island, just offshore. Many of the birds spend most of their time at sea, and visit the islands only to breed.

One of the most common seabirds is the sooty tern. It’s also known as the “wide-awake” bird because it keeps people awake -- it never shuts up. The local airport is named Wideawake Field because of it.

Another resident is the Ascension frigatebird. It’s large but lightweight, so it can soar for months without ever touching down. It’s not especially pleasant, though -- it sometimes feeds by forcing other birds to throw up. Still, it’s a part of the continuing saga of life on this remote Atlantic island.