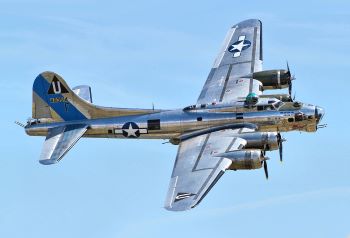 Scientists thought the eye of the hurricane could be weakened through seeding from above, using a B-17 Flying Fortress. Credit: Airwolfhound, BY-SA 2.0.

Timing, as they say, is everything. Consider an experiment conducted 75 years ago to show whether we might be able to control hurricanes. Scientists picked what they thought was the right storm at the right time. But their timing couldn’t have been worse. The hurricane changed direction and slammed into the coast. The public outcry quickly shut down the work.

Project Cirrus was conducted by General Electric and the Pentagon. The idea was to “seed” clouds in the eyewall of a hurricane with particles of dry ice. Water vapor would freeze onto the seeds, releasing heat and causing the eyewall to weaken.

On October 13th, 1947, scientists aboard a B-17 Flying Fortress dropped about 180 pounds of dry ice into a hurricane known unofficially as King. The storm had crossed Florida, causing record flooding. Now, though, it was 400 miles east of Jacksonville, moving away from land and getting weaker.

The hurricane soon made a hairpin turn, though, and gained strength. It slammed ashore in Georgia, where it killed one man and caused about two million dollars in damages. Members of the public blamed the experiment and threatened to sue. But scientists found records of an earlier hurricane that had behaved just like King did. They also found that King had started its turn shortly before the seeding. The experiment had no real effect on the hurricane.

It would be years before anyone would try to change a hurricane again—thanks in part to some bad timing.