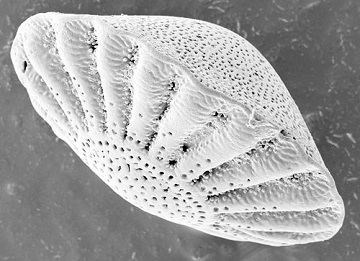 To borrow an old phrase, everything old is new again. Consider life in the Arctic Ocean. As the ocean warmed up after the last Ice Age, it was divided into several layers. The layering made life hard for the smallest members of the marine food chain. And with the Arctic growing warmer now, the same thing could happen again. That could limit not only microscopic life, but larger organisms as well.

Researchers probed the history of the Arctic by studying fossils found in the sediments. In particular, they looked at the single-celled organisms known as foraminifera. Their fossilized shells preserve a record of the nutrients they consumed.

The researchers found a big change about 11,000 years ago, at the end of the Ice Age. As global sea level rose, water from the Pacific Ocean began pouring into the Arctic. Pacific water is warmer and less salty than water from the Atlantic, making it less dense. So when the waters came together, they created layers of different temperature and salinity.

In those conditions, nitrogen -- a key nutrient -- stayed in deeper Atlantic waters. The small organisms at the surface couldn’t go that deep, so their numbers stayed low. And without those organisms, the populations of fish and other large creatures were low as well.

About 6,000 years ago, the layering became less prominent. But today, the Arctic is getting warmer. That may once again create the layered structure seen in the past -- and limit life near the top of the Arctic Ocean.