The land often feeds the sea. Nutrients from the land wash into the sea, where they support the tiny organisms that form the first link in the food chain. In some places, though, it works the other way around -- the sea provides the nutrients to support life on land. 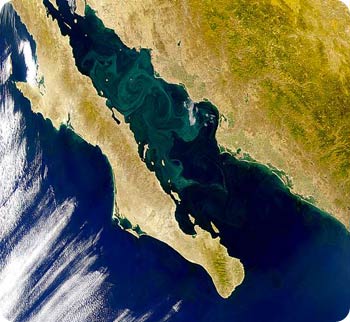 An example is found in the Gulf of California, on the eastern side of Baja California. Researchers began studying the area almost two decades ago. Today, the work is being carried on by high school students.

Gary Polis, a researcher at the University of California-Davis, began studying a group of desert islands near Bahia de los Angeles. He found that the waters of the Gulf of California are many times more productive than the land.

Polis found that the gulf shares its bounty. Tides and waves carry algae and dead sea creatures ashore, providing food for crabs and other beach-dwellers. These, in turn, serve as food for mammals and reptiles. Thanks to this manna from the sea, the islands show much more life -- and a much greater diversity of life.

Polis died when his boat capsized in 2000. But a non-profit group teamed up with California universities and organizations to continue the work. They’ve set up summer field trips for students from San Diego high schools. The students are doing the same work that Polis did, while expanding the project to study more species.

The project is providing some hands-on training in marine research -- and helping scientists keep tabs on an unusual marine environment.