Much of the American coastline is a transition zone -- not an abrupt boundary between land and sea, but regions where both domains exert their influence. These regions are known as estuaries. They’re enclosed areas like bays and marshes where freshwater from the land mixes with saltwater from the sea. 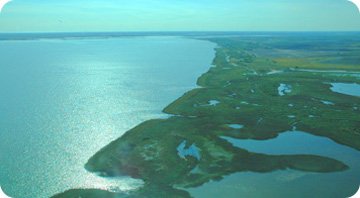 Scientists, government agencies, and landowners are working together to understand and protect these environments through a network of National Estuarine Research Reserves. They’re established by the federal government in states that have coastal management programs. The system consists of 27 reserves, from Alaska to Florida. The most recent is on the coast of South Texas.

The reserves don’t impose new regulations. Instead, they bring together many groups to make better coastal management decisions.

Scientists identify habitats and animal populations in the reserves. They also monitor the ecosystems to see how they change over time. That helps them understand the effects of both local development and global climate change.

In Apalachicola, Florida, for example, scientists have mapped the habitats of fish that are an important part of the local economy. And in San Francisco, scientists are evaluating the effectiveness of efforts to restore local wetlands by comparing restored areas to protected original wetlands. These efforts, along with those at many other reserves, should help policy makers balance environmental concerns with economic ones -- keeping these coastal transition zones healthy.

This program was made possible by the National Oceanic and Atmospheric Administration.