The mighty Mississippi River dumps a hundred cubic miles of water into the Gulf of Mexico each year.

The Amazon River dumps about 10 times that amount into the Atlantic. And thousands of other rivers and streams around the world contribute even more to the world’s oceans. 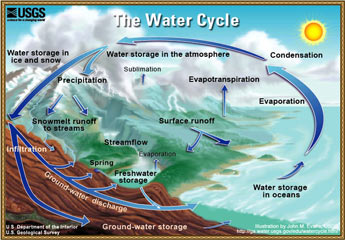 Yet much of the water that flows from land to sea is hidden from view: As much as 10 to 40 percent comes from springs and other sources that are underground.
Scientists are tracking down many of these hidden discharges. The search can help them identify sources of pollution. Policymakers can use this information to help protect the quality of coastal waters.

One technique for identifying underground water sources tracks radioactive isotopes -- naturally occurring elements found in the water. Elements such as radium and radon are more abundant in groundwater than in riverwater.

Scientists take samples from several locations in coastal estuary systems and identify the different isotopes of radium, radon, and other elements. They compare the numbers to samples of known underground water sources, and to the amount from other sources, such as rivers.

From that, scientists can identify how much groundwater is entering the estuary, and where it’s coming from. If the estuary water is polluted -- with fertilizers, for example, or waste water from industrial activities -- then scientists can work to pinpoint the source of the pollution. And that can help efforts to keep coastal waters clean.