Every time you take a breath, most of what you inhale is nitrogen, because it makes up about four-fifths of the air. 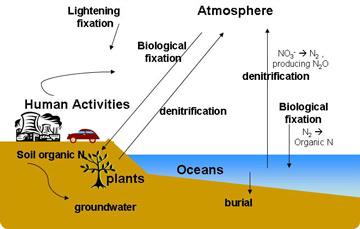 Nitrogen is an important nutrient, and a crucial component of some of the basic building blocks of life. Yet the nitrogen in the air is in a form that complex organisms like people can’t use. It has to be altered through a dynamic process called the nitrogen cycle. This cycle passes nitrogen from one organism to another, so the element is a sort of “currency of life.”

Nitrogen is transferred up the food chain from bacteria to larger organisms, like fish. When these organisms are eaten or die, their nitrogen is converted into a usable form such as ammonia through digestion or decomposition. Most of this nitrogen can be reused by plants and animals. But some of it is converted back into nitrogen gas, which bubbles back up into the atmosphere -- where the process starts all over again.

Like all currencies, nitrogen has to be kept in balance. If there’s too much -- when a lot of chemical fertilizers flow into the sea, for example -- it creates “inflation”: runaway “blooms” of algae known as red or brown tides. But if there’s not enough nitrogen, then it creates a “recession,” because nothing grows without this vital nutrient.