A tasty fish that’s not all that well known could become a seafood staple in the years ahead. 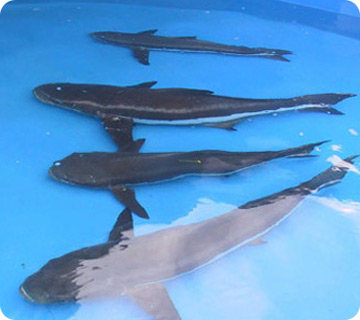 The fish is called cobia or ling. It’s found in fairly warm waters around the world, including along the American Atlantic and Gulf coasts.

Cobia grow up to six feet long, and can weigh 50 to 100 pounds. And its firm, white meat tastes good.

Cobia hasn’t caught on commercially, though, because they travel alone or in small groups, so there’s no way to catch them in large quantities.

But researchers are studying the fish to learn more about its growth and reproductive cycles. And they’re raising cobia in climate-controlled tanks to determine how often they can spawn. The information could help commercial operators raise the fish for sale to markets and restaurants.

Aquaculture is a growing business in the United States and elsewhere. Over fishing, pollution, and other factors are limiting the amount of fish that are caught in the wild. But businesses are raising ever-larger quantities of fish in captivity.

The greatest aquaculture success to date is tilapia. Fifteen years ago, it was almost unheard of in the U.S. Today, though, Americans consume several hundred million pounds a year -- most of it grown commercially. And the Department of Agriculture says that by the year 2020, it could be one of the top four seafood items in the country.

Cobia has a long way to go to catch up. But if current research is successful, we could start seeing it on the dinner table in the next decade.