One of the many futuristic technologies in “Star Trek” was the tricorder -- a portable device that let crew members quickly scan the environment around them. 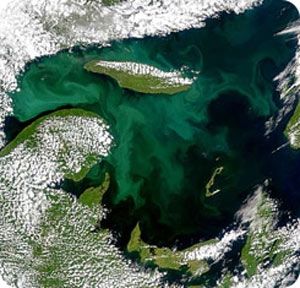 Present-day scientists aren’t waiting for the 23rd century to build such devices, though. They’ve already put together tricorder-like gizmos for medicine, materials science, and other fields. And today, marine scientists are designing their own tricorders.

One target for such devices is harmful algal blooms -- better known as red or brown tides. They occur when microscopic plants in the water produce population explosions. Some of these blooms can kill fish. Others don’t harm the fish, but do harm the organisms that eat the fish -- including people.

It’s difficult to predict when such a bloom will occur, though. And there’s not a lot of detailed information on the full cycle of harmful blooms.

One technology that may provide that information is fiber optic biosensors. Instruments incorporating these sensors would be placed on buoys. The instruments would collect microscopic organisms and break them open to release the molecules inside. This “cell soup” would be tested using the fiber optics, which contain thousands of tiny sensors, each one specific to a particular type of algae. When the sensor encountered molecules from its target species, it would produce light. The signal would be processed, recorded, and transmitted to shore.

Such a technology could pick up the first signs of an algal bloom. That would give scientists time to alert others to a potential danger in coastal waters.