From “Flipper” to Sea World, we’ve all heard the chirps, trills, and other sounds produced by bottlenose dolphins. But the sounds are more than just entertainment. They help the dolphins locate prey, stay close to family members, and warn others of danger. And certain types of sounds may serve as “names” that identify individual dolphins. 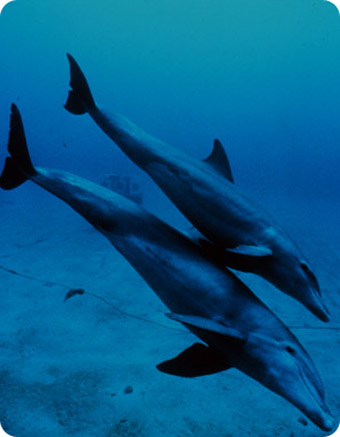 The sounds are known as “signature whistles.” In the early 1990s, marine biologists discovered that individual dolphins produce their own unique whistles. Some proposed that the whistles were used like names, but others disagreed.

Some recent research suggests that the whistles really are like names.

A team led by Vincent Janik of the University of Saint Andrews in Scotland studied wild dolphins near Sarasota Bay, Florida. The researchers recorded the sounds of many dolphins. They re-created some of the sounds electronically, and played them underwater. The dolphins generally responded to the sounds like those of their close relatives, but ignored those of other dolphins.

The sounds might be especially important because bottlenose dolphins live in large groups. The waters they inhabit are often murky, so keeping track of other dolphins can be difficult.

Baby dolphins create their own signatures, which other dolphins repeat back to them. The babies continue using these signatures throughout their lives -- perhaps telling other dolphins the equivalent of, “Hi there, my name is Flipper!”