Thanks to warnings by hurricane forecasters, thousands of people moved out of harm’s way before Tropical Storm Gabrielle hit Florida in 2001. But 14 sharks that researchers were tracking also moved out of the way. They may have used their own forecasting technique to detect the approaching danger -- a change in pressure in the inner ear caused by the dropping air pressure. 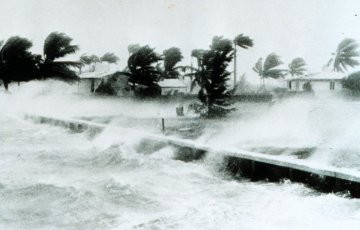 Waves crash on the Miami shore as a hurricane makes landfall in 1945. Photo: National Oceanic and Atmospheric Administration / Department of Commerce.

The sharks survived the storm, and other studies suggest that sharks, dolphins, and other marine creatures often know when it’s time to move to safer waters. But many creatures don’t have that luxury when a hurricane hits. As a result, many fish and other creatures are decimated by the big storms.

A hurricane can churn up sediments, change the salinity of the water, deplete the oxygen supply, and wash pollutants from the land into the sea -- often with devastating results.

Hurricane Isabel, for example, wiped out young American shad and river herring when it hit North Carolina in 2003. The hurricane dramatically lowered the amount of oxygen in the water, and the young fish couldn’t adapt.

But not every animal suffers the same fate. A long-term study of diamondback terrapin turtles in South Carolina found that they survived hurricanes with little trouble. Not only were they unharmed, they weren’t even forced out of their home waters. Unlike people and sharks, they didn’t have to leave home to avoid the devastation of nature’s fury.