Ocean creatures use a lot of methods to catch their next meal. Some just swim up and grab it. Others hide in the rocks and wait for it to swim by. 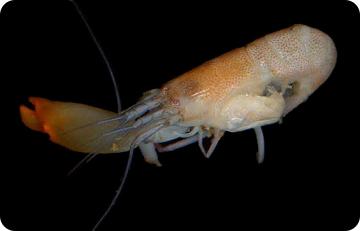 One of the most interesting methods belongs to a homely little shrimp. Although it’s no bigger than your finger, it stuns or kills its prey with an exploding bubble.

It’s known as the snapping shrimp, and it’s found in shallow tropical waters around the world. It’s named for the snapping sound it makes when it clicks the larger of its two claws. The claw looks a bit like a boxing glove, and it can deliver quite a wallop.

Scientists used to think that the snapping of the claw itself produced the sound -- recorded here by researchers at the University of South Florida’s Mann Laboratory. But a few years ago, scientists from Germany and the Netherlands found otherwise.

The shrimp closes its claw so fast that it generates a little bubble of gas that moves at up to 60 miles an hour. When it hits, it can stun or even kill the prey. And when it pops, it makes a click -- the sound that gives the snapping shrimp its moniker.

The scientists also found that the bursting bubble creates a little flash of light. It’s so faint that they haven’t seen it yet, but sensitive instruments have recorded short bursts of light. The bubble gets extremely hot -- almost as hot as the Sun.

That gives the snapping shrimp a powerful jab -- strong enough to K-0 its next meal.