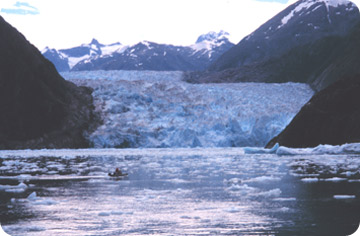 A study of conditions over the last half-century, though, shows that the amount of freshwater flowing into these northern seas is increasing. Scientists are monitoring the flow to see how it impacts both oceans and land.

A team of researchers tallied data on the flow of freshwater for all major sources -- rivers, rain, and melting ice.

The team found that about half of the excess fresh water is coming from rivers and rainfall. Over the last 50 years, that’s added up to enough to cover the state of Texas to a depth of about a hundred feet. A little bit less came from melting glaciers and icebergs.

Annual records show that the inflow has increased over the years. The boost could be caused by global warming, which melts glaciers and icecaps, increases precipitation at high latitudes, and increases runoff from rivers.

This inflow of freshwater could have large-scale effects.  Normally, the dense, salty North Atlantic waters sink toward the bottom and equatorial currents bring in water to replace it.  This circulation pattern is important to help balance heat throughout the earth.  But, the new influx of Arctic freshwater is diluting the saltwater making it less dense and potentially unable to sink, which disrupts ocean currents that carry warmer waters from equatorial regions to high latitude regions such as Europe -- potentially causing these areas to cool off by several degrees over the coming decades.

*When originally recorded, an error was made in the final paragraph of this script.  Original statement read as: Because freshwater is denser than saltwater