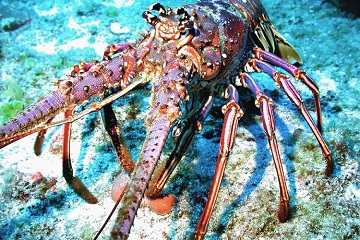 It feels like ages ago that the entire country buckled down at home for months, keeping distance from others to avoid catching COVID-19. While those months of self-isolation may have felt unnatural, humans aren’t the only species that uses social distancing to stop a virus from spreading through a population. Take, for example, the Caribbean spiny lobster. These lobsters are normally social, sharing dens because there’s safety in numbers when predators come along. But if a healthy lobster discovers a sick one in a den, the healthy crustacean will clear out, taking its chances with predators on its own before exposing itself to a disease.

Scientists observed this behavior both in the wild and in the lab. Underwater surveys found that 93% of spiny lobsters infected with the deadly Panulirus argus virus are solitary, compared to only 44% of healthy lobsters. In a lab experiment, scientists let spiny lobsters choose between an empty den and one occupied by another lobster. If the occupying lobster was healthy, the newcomer joined them. If the resident lobster was sick, the newcomer opted for the empty den. But when infected lobsters faced the same choice, they joined the sick lobster as often as the healthy one.

How can healthy lobsters tell who’s sick? The urine of infected lobsters contains chemicals that alert other lobsters to the infection, even before any symptoms appear. When scientists temporarily blocked the nephropores—organs that release urine—of sick lobsters, their healthy companions joined them, none the wiser. Of course, people don’t have antennae that can sense another’s infections, as lobsters do. But we can use our heads in other ways—like social distancing and developing vaccines and medications—to avoid illness just as well as spiny lobsters.