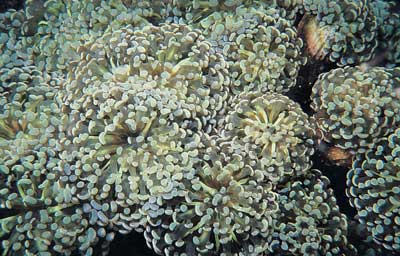 Plankton that corals feed on are attracted to the coral’s fluorescent glow. Credit: NOAA

Deep below the ocean’s surface, some corals emit an otherworldly glow called fluorescence, but for years, scientists have wondered about the purpose of these glowing colors. Among the hypotheses biologists have proposed is that fluorescence might optimize photosynthesis, shield against the sun’s radiation, protect plant-eating marine life that lives among the corals, or attract algae that live inside the coral and provide them with energy through photosynthesis. Now, researchers have come up with a different hypothesis: fluorescence attracts the plankton that corals capture and eat.

Biologists in Israel conducted a series of experiments to determine if this new hypothesis held up. First, they tested whether fluorescence attracts plankton. In the lab, when tiny crustaceans called brine shrimp were given the choice between a green or orange fluorescent lure and a clear lure, they preferred the bright and colorful one. Yet when both lures were clear, the tiny creatures didn’t show a preference. Fishes, which aren’t coral prey, actually avoided the fluorescent lures, especially the orange ones. In experiments conducted in the Red Sea, traps containing green and orange fluorescent lures brought in twice as much plankton as clear traps.

Then the researchers examined how effectively corals that live at nearly 150 feet deep could capture plankton. Less sunlight penetrates those depths, so corals cannot rely on photosynthesis by their symbiotic algae. Bringing these corals into the lab, the researchers compared the feeding success of corals with green fluorescence to corals with yellow fluorescence. When they used a light that suppressed the fluorescence, both types of corals caught similar amounts of prey. But under a light that enhanced the fluorescence, corals with green fluorescence snatched up 25 percent more plankton, suggesting their prey had a color preference. Together, these experiments showed that fluorescence helps make corals more effective predators.