By Science and the Sea staff 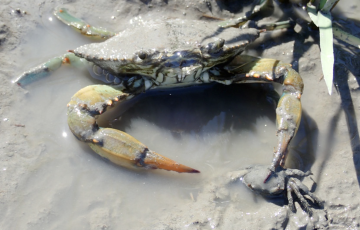 For years, scientists have believed that low tide provided fiddler crabs
with a refuge from predatory blue crabs because the fiddlers could
crawl around on the mud, out of the water where the danger lurked.
But, new observations at a Virginia salt marsh suggest that blue crabs
have a few surprises up their claws when it comes to hunting for dinner
during low tide. Researchers watched as blue crabs hid out in shallow
mud pits filled with sea water and waited, not for the tide to return, but
for fiddler crabs to inch their way closer to the edge of the pit.

When one fiddler crab ventured close enough, the blue crab lurched out
of the water, grabbed it and began chowing down on its meal. Another
blue crab ventured out of its pit and slowly stalked a fiddler crab
before snatching it and rushing back to its pit. The scientists noticed
leftover fiddler crab claws outside several water-filled mud pits, “like the
discarded bones of villagers outside a dragon’s lair,” wrote the scientist.

What makes these observations so extraordinary is that blue crabs
typically live, breathe and hunt underwater. Scientists have long
believed that these and other swimming crabs almost exclusively feed
when they are completely submerged. While blue crabs have been seen
to dash from the water a short distance across land to grab a fiddler
crab, that behavior was different from these ambushes far away from
the water’s edge. The blue crabs dig the pits themselves or use other
crabs’ pits when convenient. They successfully grab fiddler crabs about
a third of the time, but sometimes try to steal prey from other crabs.
By remaining still, camouflaged by mud in the pit, they also escape the
notice of seabirds, their own predators.