A Taste for the Toxic

By Mandy Calkins
Swelling up like a balloon is a pretty dramatic defense mechanism, but many species of pufferfish pack an even deadlier weapon — poison. 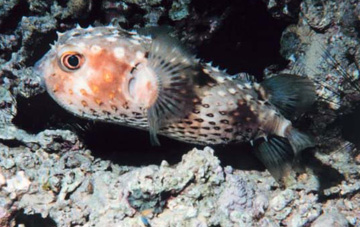 This poison is called tetrodotoxin, a word coined after the puffer fish’s scientific name. It’s a potent neurotoxin that can kill even humans when ingested. Though this toxin was first identified in puffers, the fish don’t actually make it themselves — in a way, they borrow it.

Tetrodotoxin is originally produced by marine bacteria. It travels up the food chain when microorganisms, such as plankton, consume the bacteria. These creatures are, in turn, eaten by larger animals, and some of these — such as snails, marine worms and starfish — are favorite foods of pufferfish.

How can puffers handle ingesting this deadly neurotoxin? Scientists have found that puffers are resistant to
tetrodotoxin because the sodium channels of their muscle tissue are genetically different from those of other fish. Puffers even have a special toxin-uptake mechanism in their liver that transfers toxin into their bloodstream. After accumulating toxin through their food, puffers can secrete the toxin through their skin and into the mouth of an unlucky predator.

Despite their toxin-hoarding ways, puffers are considered a desirable dinner item in some parts of the world. Some poisonous puffers can be eaten when prepared carefully, but there’s another way around the problem: rendering the fish non-toxic by eliminating tetrodotoxin from their diets. Japanese fish farmers use this strategy by raising pufferfish in cages or land-based aquaculture systems. That’s a lot less risk on the dinner plate!