By Mandy Calkins
Puffer fish have one of the most dramatic defense mechanisms of any creature in the sea, thanks to bodies customized for inflating like balloons.

When threatened, puffers puff themselves up by gulping down water and pumping it into their highly expandable stomachs, making their bodies difficult for predators to swallow. One spiny puffer species, called the balloonfish, swells to about 3 times its usual volume. Most of that increase is thanks to the stomach, whose many folds let it expand by 50 to 100 times! At the same time, hundreds of sharp spines all over its body stand erect. Not an appetizing prospect for a predator. 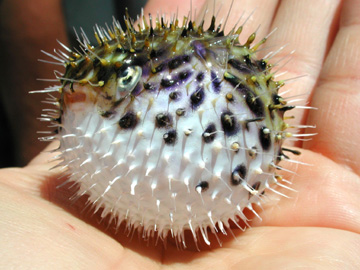 There’s room for this ballooning because the puffer’s peritoneum — the membrane that lines the abdominal cavity — also has many folds that unfurl. Puffer skeletons lack ribs and a pelvis, and its flexible spine is able to curve over the inflated stomach. As the body becomes spherical, it engulfs even the puffer’s dorsal and tail fins, depriving predators of an easy grabbing point.

These modifications seem extreme, but scientists think the inflating mechanism may have grown out of less dramatic behaviors seen in puffers’ modern relatives. Ocean sunfish, for example, will cough to eject inedible particles they ingested. Triggerfish blow jets of water to disturb prey. Like the inflation practiced by puffers, these behaviors involve “pumping” water into the mouth. The muscle movements in all these behaviors are remarkably similar — the only difference is that instead of blowing the water out, puffers force it into their stomachs. Only a few evolutionary tweaks led from coughing, to water blowing, to the truly amazing inflation feat of the modern puffer fish.