What is the greatest size and age a living thing can achieve? Seagrass meadows may hold the answer.

Seagrasses are flowering plants that have adapted to live submerged in the ocean. Although there are only about 60 species, they cover a vast amount of the world’s temperate and tropical coastal areas. 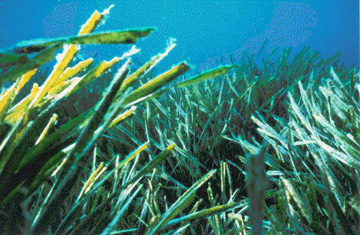 Seagrasses can reproduce sexually with flowers and seeds, but it is thought they spread more quickly by asexual reproduction, where new shoots form along the plant’s underground runner, or rhizome. Each shoot has the same genetic makeup, or genotype, as the parent plant. Spreading this way, seagrasses can form huge clones — meadows of shoots that all share the same genotype.

Posidinia oceanica, a long-lived, slow-growing seagrass species found in the Mediterranean Sea, takes this strategy of growth to the extreme. To find out just how much a single clone could spread, scientists sampled seagrass patches in different parts of the Mediterranean. What they found was astonishing: individual clones covered distances of more than a mile, with the largest clone they found spanning a whopping 9 miles. This puts Posidonia in contention as one of the largest clonal organisms on Earth!

Even more impressive than the seagrass clone’s size was its age. Individual shoots only live a few years. But using computer models and prior knowledge about the rate at which Posidonia spreads, scientists were able to estimate that, to reach a miles-wide size, the seagrass clones had been growing for tens of thousands of years!

With future seagrass research, scientists hope to learn more about the potential for clonal organisms to live longer — and larger — than ever thought possible.