You might imagine marine snails crawling around on the sea floor. But thanks to a unique adaptation, one family of snails lives life at the top of the ocean.

Violet snails cannot swim but they can construct “rafts” from clusters of air bubbles, and these rafts allow the snails to float at the water’s surface. They float throughout tropical and subtropical oceans, preying on an abundant food source − jellyfish. 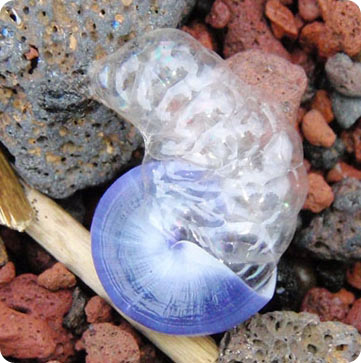 A violet snail with it's bubble raft on Maui, Hawaii. Credit: Wikipedia

To construct a raft, the snail sticks part of its muscular foot just above the water and cups the foot to enclose a pocket of air. Glands on the foot secrete a tacky mucus that quickly seals the air in a bubble. To make its float larger, the snail presses the newly created air bubble onto the existing cluster of bubbles, and as the mucus hardens, the bubble adheres to the rest of the “raft.” Part of the snail’s foot grasps onto the raft at all times, and the snail floats upside-down in the ocean.

Curiously, violet snails are closely related to − and thought to have evolved from − a family of snails that dwell on the ocean floor. How did they go from a bottom-dwelling lifestyle to one that relies on access to air?

It is possible that egg capsules produced by bottom-dwelling snails occasionally trapped air which lifted the egg capsules and the female that produced them to the surface. Over time, these bubble masses could have evolved to function as rafts instead of egg-carriers − allowing violet snails to rise to the top.