Answers in the Ice

Sea ice forms when ocean water is cooled to the freezing point by cold polar air. Freezing begins in fall, when the amount of light from the sun decreases, and ice continues to expand and thicken during the dark winter months. When summer returns, the sun’s energy warms the surface of the ice, causing portions of it to melt. 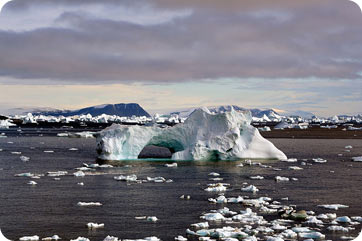 One important feature of sea ice is its white surface created by the snow cover, which reflects 50 to 70 percent of the sun’s light. Ocean water, by contrast, reflects only about 5-10 percent of solar energy; the remainder is absorbed and it heats the water. Sea ice cover acts as a barrier that prevents sunlight from warming polar seas. This is critical because our global climate is maintained by air and sea currents that distribute the coldness of the polar regions throughout the planet.

Monitoring the thickness, area and movement of sea ice helps scientists keep tabs on how polar temperatures affect — and are affected by — changes in climate. In field studies, researchers take ground measurements of ice or deploy buoys with data-collecting sensors. To get a bigger picture of sea ice characteristics, scientists use satellites as remote sensing devices. Imaging radar on satellites, for example, sends out microwave signals, which reflect off sea ice and back to the satellite. Researchers can analyze radar images collected over time and, in tandem with data from other study methods, search for patterns that reveal changes in Earth’s temperature and climate.

We’ll discuss how changes in sea ice affect Earth’s climate in our next issue.