Bluefin tuna migrate thousands of miles, but exactly how they find their way through the vast blue is a mystery. One answer may lie with the tuna’s “third eye.” 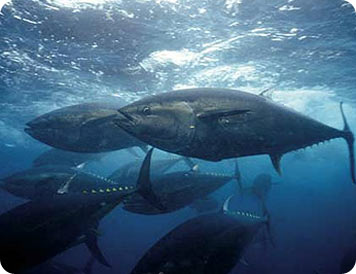 Researchers discovered clues about tuna navigation while investigating the bluefin’s habit of making sharp descents and ascents at dawn and dusk, known as spike dives. The team gathered information from southern bluefin tuna off Australia’s southern coast. Fish in this study were equipped with electronic tags while they completed round trip migrations of 5,000 to 16,000 miles. Light and depth information recorded by the tags showed that tuna regularly made spike dives about 30 minutes before dawn and 30 minutes after sunset.

One explanation for the dives involves a structure in the brain called the pineal organ, sometimes referred to as the “third eye.” In tuna, the pineal organ is complex and has light-sensing cells similar to those found in the eyes. Tuna also have what is known as a “pineal window,” a translucent patch of skin on the surface of the head, between the eyes. A cartilaginous tube lets light pass through this window to the pineal organ, which is situated just on the top of the brain.

It’s unknown exactly what function the pineal organ has for tuna, but it’s thought to play a navigational role in other animals, including birds and amphibians. Therefore, the researchers suggest, spike dives might be a way for tuna to gather light information at dawn and dusk. Through these cues, the “third eye” may help guide them on their long-distance journeys.