By Mandy Calkins
When it comes to finding food and shelter on the vast open ocean, some petrels and related seabirds simply follow their noses. 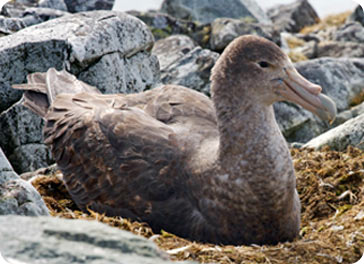 Petrels are pelagic birds, which means they spend most of their time flying over open water, only venturing
onto land to raise young. Along with albatrosses and shearwaters, petrels come from an order of birds known
as “tubenoses” because of their prominent, tube-shaped nostrils. Birds in this order have some of the largest
olfactory bulbs − the portion of the brain involved in smelling − in the avian world.

One way they use this sniffer is to find their way home during the nesting season. Researchers found that
nocturnal species of petrels had a hard time finding their nests when their sense of smell was impaired, suggesting that these birds rely on scent to locate their nests.

Some petrel species also sniff out their meals. Krill, a favorite prey of petrels, feed on phytoplankton. As krill gobble them up, phytoplankton emit an odiferous compound into the air. Petrels and other tubenose birds pick up on this aroma and use it to home in on patches of krill in the water.

The ability to detect this odor might even help birds orient themselves at sea. Masses of phytoplankton are often found above underwater features such as seamounts and breaks in the continental shelf. If tubenose birds use their sense of smell to find these features, scientists surmise, they may be able to use them as points for navigation − another way a keen nose helps guide them on the open seas.