With its streamlined shape, the blue shark is built for efficient swimming. But more impressive than its streamlined efficiency are the distances this shark covers in ocean-crossing migrations.

The blue shark is found throughout the world’s temperate and tropical oceans. As a pelagic species, it spends most of its time roaming open water. 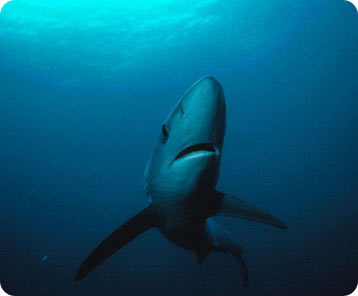 Scientists first got a notion of just how wide-ranging the blue shark is when sharks tagged in New England waters began reappearing off the coasts of Portugal and North Africa. As more and more sharks tagged in the western North Atlantic started popping up on the other side of the ocean, scientists made a key observation: most of the sharks that had crossed the ocean were females, while males tended to stay on the western side. Scientists surmised that, after mating in the western Atlantic, female blue sharks were heading east to deliver their pups in nursery grounds off the European and North African coasts. Such journeys cover 1,200 to 2,000 miles or more!

Blue sharks get some help accomplishing this feat from ocean currents. The North Atlantic gyre is a circular arrangement of currents that flows in a clockwise pattern, moving northward along the East Coast of North America, eastward toward Europe, southward to North Africa, then westward back toward North America. Rather than swimming in a straight line, blue shark females ride these currents on their way to eastern Atlantic pupping areas. Tagging studies have even shown that some sharks complete the loop by following currents back to western Atlantic waters. Such epic migrations make the blue a true world traveler of sharks.