Researchers in the Gulf of Maine have illuminated the role whales play in recycling nutrients in the ocean − and the secret is in the poop. 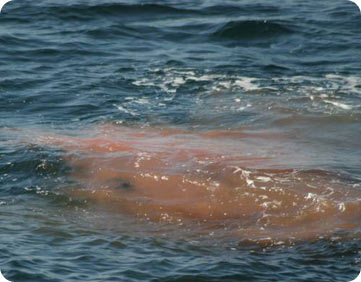 Photo of whale poop after a humpback whale was feeding on krill. Credit: Blue Ocean Society for Marine Conservation www.blueoceansociety.org

Instead of sinking to the bottom, whale waste particles actually float at the surface in a dispersed cloud or plume. These feces contain nitrogen, an essential nutrient for microscopic plants, called phytoplankton, at the base of the marine food web.

Phytoplankton inhabit the euphotic zone − the narrow upper layer of the ocean that is reached by sunlight. Along with sunlight, they need nutrients such as nitrogen to survive. But some nitrogen sinks out of the euphotic zone in fecal pellets or as part of the bodies of tiny dead organisms.

Here’s where the whales come in. Humpback and right whales in the Gulf of Maine dive deep to feed on tiny crustaceans or fish, and when they surface, they release plumes of feces containing valuable nitrogen. Researchers found that water samples taken near whales’ fecal plumes contained more nitrogen than did samples taken elsewhere in the area.

In the Gulf of Maine, nitrogen is an important factor that limits phytoplankton growth − its abundance determines how productive they can be. Phytoplankton supports a whole host of marine life, including the crustaceans and fish that whales eat.

The researchers propose that in some areas, large marine mammals play a vital role in bringing nutrients back to surface waters. Rebuilding whale populations could even help make waters more productive in places where rising ocean temperatures have put a damper on phytoplankton productivity.