By Mandy Calkins
Behold the lowly amphioxus, and you’ll see an animal whose genes are not very different from yours. 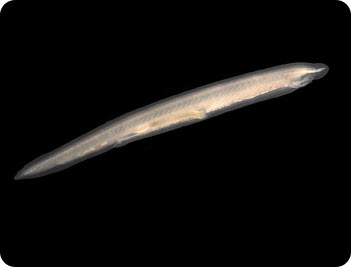 Also known as a lancelet, amphioxus is a small, fishlike invertebrate about 2-3 inches long. Common in shallow marine waters, it burrows in the sand and filters nutrients from the water. What makes this humble creature so intriguing to scientists is its unique status as the closest living invertebrate relative of backboned animals.

Though amphioxus lacks the eyes, ears, or paired limbs of its more advanced cousins, it does share some key traits with vertebrates. Its body plan is similar to that of a vertebrate, with an elongated body, a tail, and muscles arranged in segments. Amphioxus also has a nerve tube running the length of its body, supported
by a flexible rod called a notochord. These structures are much like the spinal cord and backbone found in
vertebrates.

Though the evolutionary paths of amphioxus and the vertebrates separated about 520 million years ago, scientists can look to amphioxus for clues about what the ancestor of vertebrates might have been like. In
2008, scientists began comparing the genetic makeup, or genome, of amphioxus with that of vertebrates and
discovered that they were remarkably alike. Even though vertebrates are more complex, they didn’t
create many new genes to get that way. Instead, they simply duplicated old genes or combined them in new
ways. Researchers believe amphioxus genes have much more to reveal about how the backboned animals of today evolved from such humble beginnings.