Cleaning Crew on the Reef

Mouth gaping wide, a massive grouper cruises a coral reef, and approaches a tiny shrimp. As the predator gets closer, the shrimp doesn’t flee… it swims right in! 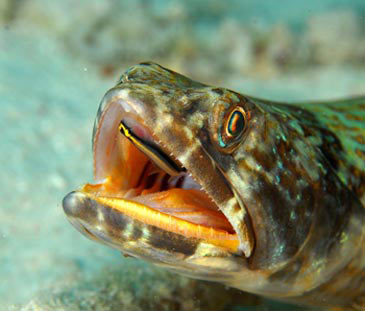 This shrimp isn’t about to become a meal, though. It’s a cleaner shrimp, and the grouper is stopping by a “cleaning station” to get spruced up. Common in coral reef communities, cleaning stations are inhabited by cleaner shrimp as well as fish such as gobies and cleaner wrasses. Larger fish, sharks, rays and sea turtles seek out these areas, allowing the cleaners to nibble away parasites and dead or infected tissue from their bodies and mouths. The interaction between cleaners and their “clients” is a symbiotic relationship — one where both organisms benefit.

This particular symbiosis has some subtle nuances. Researchers observing bluestreak cleaner wrasses off the coast of Egypt noticed an intriguing behavior that didn’t seem related to cleaning: a wrasse would swim above its client and touch the client’s body with its fins. Because cleaners performed this touching mostly on predatory species, the researchers suspect that tactile stimulation might be the cleaner’s way of preventing a conflict. Cleaners also gave tactile stimulation to clients who swam off or turned aggressive after being startled by a bite from the wrasse, suggesting that touching might be the cleaner’s way of smoothing things over.

Scientists aren’t sure what benefits the cleaner’s customers get from the touching. It could have a positive effect on the client’s health, such as reducing stress hormones — another perk that would keep these customers coming back to the cleaning station again and again.