Meet a diminutive shark that snacks on “cookies” made not of flour and sugar, but of tuna or whale. 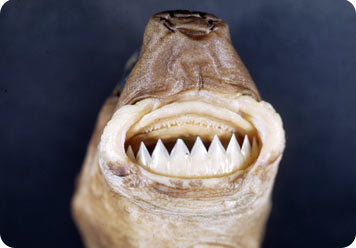 At 16-22 inches in length, the cookie-cutter shark is one of the smaller denizens of the deep. From above, this little cigar-shaped shark may look harmless, but a peek at the underside of its coneshaped snout reveals a row of fearsome, saw-like lower teeth.

This unusual mouth is designed for the shark’s parasitic feeding technique. Using its thick lips and tongue to create suction, the shark latches onto the body of its victim — a tuna, marlin, seal, dolphin, whale, or other soft, tasty creature. The shark’s tiny upper teeth hold this grip while its lower teeth slice into the flesh. The shark then twists its body, scooping out a chunk of flesh and leaving a rounded wound that looks as if it were punched out by a cookie cutter.

Coloration may help the cookie-cutter shark snag its meals. Light-emitting organs called photophores give the shark’s underside a greenish glow, but there is a darkened “collar” area around the gill slits that lacks photophores. Scientists think the contrast of this dark area with the glow of the rest of the shark’s body creates a silhouette that resembles a small fish to predators swimming below. Fooled by the illusion the predator swims closer, hoping for a meal - but it’s the cookiecutter shark that gets to take a bite!