Here’s a warning to the millions of plankton in Texas Gulf Coast waters: You’re being watched!

A specialized instrument called the Imaging FlowCytobot is on duty, analyzing microscopic organisms in the sea at the University of Texas Marine Science Institute. 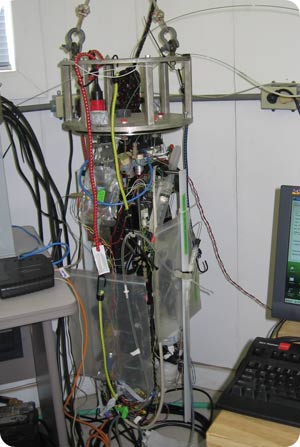 The Imaging FlowCytobot in the pier laboratory at the University of Texas Marine Science Institute. Credit: Dr. Lisa Campbell, Department of Oceanography Texas A&M University
The device uses flow cytometry, a sophisticated technique for counting and identifying cells suspended in fluid. The Imaging FlowCytobot records images of single-celled organisms in seawater, and special software analyzes the images and identifies the organisms. The data help scientists keep tabs on what types of plankton are in the area and when certain types may be reaching dangerously high numbers.

The Imaging FlowCytobot is located in a pier laboratory over the ship channel. Strong currents there make it impractical to place the instrument in the water, so a pump sends seawater samples through the device.

In 2007, scientists from Woods Hole Oceanographic Institution in Massachusetts and Texas A&M University deployed the Imaging FlowCytobot on the coast of Texas. They wanted to see if it could spot a type of algae called Karenia brevis, the culprit in harmful algal blooms that can lead to fish kills and shellfish poisoning in humans.

But in 2008, the device spied something else: an abundance of Dinophysis ovum - a different alga that also can accumulate in shellfish and make people sick. Thanks to this early warning, authorities were able to close shellfishing areas and recall seafood before there was serious trouble. In the fall of 2009, the Imaging FlowCytobot provided an early warning of a Karenia brevis bloom event for the Port Aransas region. And it’s still keeping plankton under surveillance.