Pass by a sea cucumber in a tide pool, and you may hardly notice this lowly, pickle-shaped creature. But try to make a meal out of one, and you’ll probably never forget it. 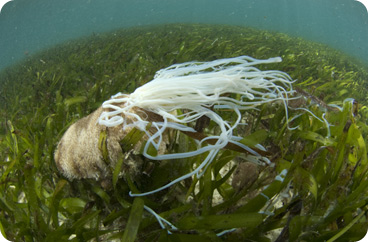 Sea cucumbers are found throughout the world’s oceans, from shallow coral reef habitats to the deep sea floor. With their squishy bodies and sluggish movement, they may seem like easy targets for large fish and other predators. But sea cucumbers have some effective - if somewhat repulsive - defense mechanisms.

First, a sea cucumber’s typically soft, flexible skin has the amazing ability to quickly become more than 10 times stiffer when touched - making it a lot less appealing for a predator to bite into.

Distraction is another defense strategy. Some sea cucumbers can spew out their internal organs, disorienting a predator long enough for the creature to crawl to a safe hiding place. The sea cucumber can then regenerate the expelled body parts over a period of weeks.

Certain sea cucumbers possess specialized structures, called Cuvierian tubules, that are made for defense.
When one of these creatures is threatened, it aims its back end toward the offender and expels the tubules, which look like white, gummy threads. When they touch an object, the tubules grow longer and stickier - perfect for entangling a predator long enough for the sea cucumber to make its escape. The ejected tubules regenerate, but the sea cucumber contains several hundred of them - enough to get this seemingly defenseless ocean-dweller out of several sticky situations.