By Mandy Calkins
When a whale dies and sinks to the ocean floor, it sets in motion a new beginning for deep-sea life. Scientists call this a “whale fall,” and it moves through three fascinating stages. 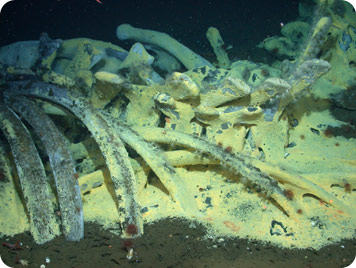 A whale carcass brings a whopping amount of organic matter to a place where food is scarce. Within days, hagfishes, sleeper sharks and scavenging crustaceans arrive to feast on the remaining flesh. This first stage is called the mobile scavenger phase. Depending on the size of the carcass, the bones can be picked clean in a matter of months.

The debris left behind by the scavengers enriches the sediment surrounding the carcass with nutrients. Small organisms such as marine worms and mollusks arrive to feed on the sediment as well as on the bones themselves. This enrichment-opportunist stage lasts until most of the easily digestible nutrients provided by the carcass are gone — sometimes up to two years.

The key to the third phase, called the sulfophilic stage, is the whale’s oil-rich skeleton. Lipids can account for 60 percent of whale bones’ weight. Bacteria break down these oils, producing sulfide in the process. Then, through a process called chemosynthesis, other bacteria oxidize the sulfide to make organic matter that organisms can feed on. Chemosynthetic bacteria support a diverse community of creatures, including mussels, clams, worms, snails, limpets, and crabs, for years.

Researchers have discovered up to 190 different species inhabiting whale falls at this final stage — some of which have been found nowhere else in the world. These amazing communities have much to reveal about life in the deep sea.