Bull sharks are unique among sharks in their ability to live in freshwater habitats for long periods of time. However, dealing with changes in salinity is very taxing on their bodies, prompting scientists to wonder why these sharks venture into fresh water in the first place. 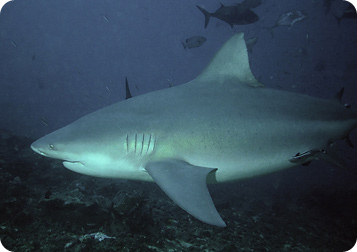 Young bull sharks may have a better chance of surviving in low-salinity waters. Credit: Wikipedia

One hypothesis is that freshwater environments are better for the survival of young bull sharks. Female bull sharks are known to enter rivers or estuaries to give birth to their pups, which grow in these low-salinity waters for 2-5 years. These juvenile bull sharks might stay in these waters because of the rich food supply available there - or they might do it to avoid predators.

One researcher has tagged juvenile bull sharks in the Shark River Estuary of the Florida Coastal Everglades to track the sharks’ movements through habitats of differing salinity. So far, the young sharks seem to be spending most of their time in upstream areas, where the salinity of the water varies widely with the seasons. This variability forces the sharks to constantly adjust the balance of salt inside their bodies.

Why spend so much time in such a physiologically demanding habitat? Juvenile bull sharks may give up the more forgiving conditions of coastal waters, where salinity is more constant, because those habitats harbor greater numbers of adult bull and lemon sharks that might prey on the youngsters. If this is true, the juvenile bull sharks’ ability to cope with changes in salinity help them avoid ending up as another shark’s meal.