A Shark in Fresh Water?

By Mandy Calkins
Among sharks, great whites are famous for their size, hammerheads for their shape, and makos for their speed. But the bull shark has a remarkable ability its fellow marine sharks do not: It can thrive in fresh water. 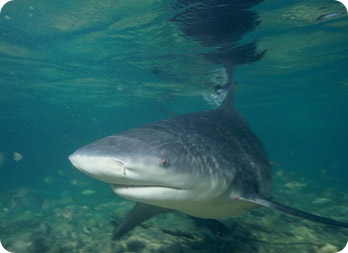 Bull sharks are known for their ability to thrive in fresh water. Credit: Wikipedia.

Bulky-bodied bull sharks are found in shallow coastal waters throughout the world, but they can journey quite far from the ocean. Bull sharks have been found more than 2,000 miles up the Amazon River! Scientists once thought a population of bull sharks in Lake Nicaragua was a separate species, they discovered that the sharks swim back and forth to the ocean through rivers and estuaries.

To survive in the ocean, sharks must maintain the proper balance of salts and water inside their bodies - a process called osmoregulation. To keep from losing water and dehydrating in the salty sea, sharks maintain high levels of a substance called urea in their bodies. They also have a special organ that excretes excess salt they absorb from sea water.

When a bull shark ventures into bays, rivers or lakes, it faces the opposite problem: It must retain vital salt while getting rid of excess fresh water. To cope with this change, bull sharks reduce the amount of urea in their body, and their kidneys work overtime, excreting about 20 times more urine - but much less salt - than when they are in salt water.

Bull sharks use a lot of energy to keep up this balancing act. What scientists want to learn next is how being able to thrive in fresh water helps bull sharks survive.