Diving for Their Dinners

Imagine that you were hungry for a meal, and there were plenty of tasty morsels around you… but you had to dive into chilly waters to get them. That’s a feat cormorants perform every time they dine. 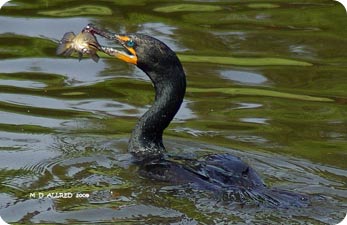 Cormorants are sleek seabirds found in coastalhabitats in most parts of the world. They hunt for fish and other small animals by propelling themselves underwater with their webbed feet and catching their prey using their long, flexible necks and hooked beaks. There are about 37 kinds of cormorants and they vary in how long and deep they can dive. One species can stay underwater for 5 minutes and reach depths of more than 200 feet.

Cormorants are superbly designed for diving. They have a low proportion of body fat and their bones are denser than those of other birds, which helps them sink. Unlike most other diving birds, cormorants have “partially wettable” feathers, which means their feathers trap less insulating air. This means cormorants lose
more body heat while diving, but it gives them the advantage of reduced buoyancy in the water.

Cormorants are believed to hunt their prey by sight, but scientists observing great cormorants in western Greenland found that the birds hunted even in the dark polar nights. The researchers suspect the birds might use sound or touch to nab their prey in the dark, trolling the seabed with their beaks. If that’s true, it would be one more ability that makes the cormorant a consummate diver.