Conservationists, governments and energy companies all seem to take a keen interest in the oceans’ continental shelves. These extensions of continents are shallow, mostly flat regions of Earth’s crust under the sea along the coastlines. On their outer edge, a continental slope falls away to the much deeper sea floor. 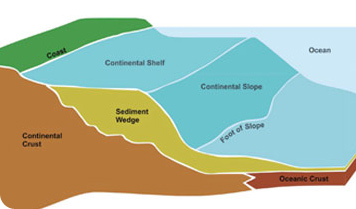 Continental margins around the world can be “active” or “passive.” At passive margins, there is little volcanic or seismic activity. There, sediment eroded from the land accumulates to form a broad continental shelf that can extend for hundreds of miles. The northern Gulf of Mexico, for example, has a broad shelf, where the Mississippi River has deposited large amounts of sediment.

At active margins, the movement of Earth’s plates causes earthquakes and volcanic activity. This activity shapes continental shelves around much of the Pacific Ocean, where shelves are often very narrow, so that sediment may get dumped into deep ocean trenches.

Continental shelves sometimes harbor portions of a continent’s mineral, oil or natural gas deposits. Because water over continental shelves is relatively shallow — an average depth of 250 feet — shelves are attractive places for extracting these resources.