A (Living) Light in the Dark

By Mandy Calkins
In the dark ocean at night some unique organisms have the incredible ability to light up the inky waters with bioluminescence — “living light.” 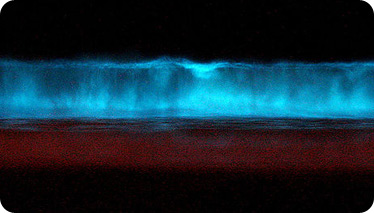 Dinoflagellates are found throughout the world’s oceans, and several common species have the ability to produce light when disturbed. When something pushes on a dinoflagellate’s cell wall, the impact sets off a chemical reaction inside the cell, and the result is a flash of blue-green light. The flash is bright — a human eye adjusted to the dark can see the flash produced by a single dinoflagellate.

Scientists think bioluminescence serves as a predator deterrent for these tiny organisms. When predators such as zooplankton try to graze on a mass of dinoflagellates, the predator’s touch sets off the light response. This “flash bulb” effect can startle the predator, or it can attract a secondary predator to come gulp down the grazer.

Because dinoflagellates are so sensitive, their luminescent response can be triggered even by the force of water flowing around them. For centuries, people have reported seeing blue streaks in the wake of ships or near swimming animals, which come from dinoflagellates lighting up in the churning waters.

In some sheltered bays in Puerto Rico, luminescent dinoflagellates occur in huge numbers. Even swimmers waving their arms or fish gliding by can cause the tiny organisms to light up and make the waters glow — an incredible display of “living light.”