By Mandy Calkins
Technically, fish are cold-blooded animals, and their body temperatures are at the mercy of the water around them. But some powerful swimmers, such as tunas, have a special adaptation to keep themselves warm. 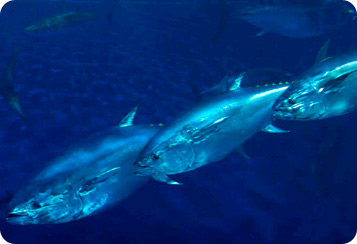 Tunas have a large mass of red muscle they use to cruise through the water efficiently at high speeds. While these muscles are working, they generate heat. In most fish, this heat is transferred to the blood and dissipates into the water when the blood reaches the fish’s gills. In a tuna, a “heat exchanger” retains some of the heat to help the fish maintain warm temperatures in its swimming muscles, regardless of the water temperature.

In these heat exchangers, a tuna’s arteries are arranged right next to the veins, which flow in the opposite direction. Colder blood is carried from the gills through the arteries. This blood gets “preheated” as it flows along next to the warm blood that the veins are carrying back from the hard-working muscles. Because the oxygen-rich arterial blood has been warmed by the time it reaches the red muscle, it doesn’t cool off the muscle, and the fish can swim most efficiently

Scientists believe this heat-exchange system helps these speedy fish chase down food. Warm muscles can put out more power, allowing the tuna to maintain some of the highest swimming speeds of any fish for long periods of time. This adaptation might also let the tuna venture into colder waters to pursue prey - without the temperature putting a chill on its speed.