When you’re lying on a soft, smooth sandy beach, it can feel like the most tranquil place on Earth. But that seemingly peaceful sand is constantly in motion, thanks to the forces of wind and water. 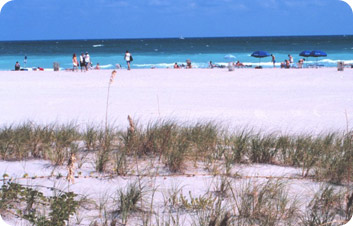 Waves might appear to hit a beach head-on, but they actually approach at an angle. So water that washes onto the beach carries particles of sand onshore, also at an angle. The water recedes directly away from the shore, carrying sand with it. If you could trace them, the sand grains would move gradually down the beach along a zig-zag path. The waves also create a longshore current that carries the particles stirred up by waves up or down the coast.

On the Atlantic coast of the United States, winds from northern storms tend to move southward, carrying particles down the coast. Beaches along the upper Atlantic coast are generally rocky and coarse. Storms erode these rocky coasts, knocking particles into the surf. As longshore currents move these particles southward, the endless churning of waves acts like a rock tumbler, smoothing and wearing down the sand particles.

By the time the particles travel the length of the coast, they’ve become very fine, smooth sand grains. Together with sand that comes from crushed coral and shells, they form some of Florida’s most beautiful, peaceful beaches.