On their own, groupers and moray eels are two fearsome coral reef predators. Groupers feed by gulping down prey in the open water, while morays can pursue fish into hiding places in a reef. But when the two team up to hunt, they’re a lethal team, leaving prey with nowhere to swim or hide. 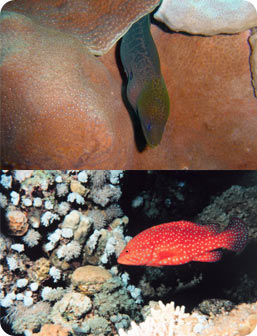 In a 2006 study, scientists observed groupers and giant moray eels in the Red Sea cooperating to hunt reef fish. A grouper would swim up close to a resting moray eel and “signal” to it with a head-shaking motion — inviting the eel to join the hunt. More than half the time, the moray would swim off with the grouper.

This study found that groupers were five times more successful at catching prey when hunting with a moray than when hunting alone. Also, because morays typically hunt at night, hunting with a grouper helps them expand their hunting opportunities into the daytime.

Scientists are unsure whether cooperative hunting is an instinctive behavior for groupers and eels, or whether it is something they learn. Whatever the case, this unusual cooperation helps both kinds of fish boost their chances of catching a meal.