Many things make marine iguanas unique. After all, they are the world’s only sea-going lizards.  But perhaps their most amazing trait is that they have the ability to “shrink” in response to environmental changes. 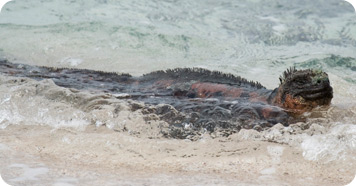 A marine iguana on the shore of Espanola, Galapagos Islands. Credit: Steve Ryan

Marine iguanas are herbivores that feed on red and green algae along the rocky coasts of the Galapagos Islands, the only place these lizards are found. But conditions brought on by El Niño, a recurring change in trade winds and surface temperature patterns in the Pacific Ocean, can make life difficult. El Niño brings higher amounts of rain to the Galapagos. This causes the red and green algae to become scarce, and many iguanas can die off as a result.

Scientists have discovered that the iguanas react to these conditions in an amazing way: by getting shorter. Within two years of an El Niño event, some marine iguanas decreased in length by up to 20%. Scientists aren’t sure how the shrinking happens, but they think the stress of El Niño conditions might bring on changes in the reptiles’ bones.

Scientists reasoned that this reaction could be triggered by the food shortage caused by El Niño. Smaller iguanas use less energy and are more efficient at grazing on algae. This shrinking strategy seems to work: Researchers found that the shorter iguanas lived longer through the tough times than their bigger counterparts.

When conditions change and food becomes abundant again, marine iguanas can “grow” back to their previous length. These incredible reptiles show that, at least for them, bigger is not always better.