Fossils of prehistoric sea creatures aren’t just remarkable for their massive size and fearsome looks — they also give scientists clues about what the ocean’s polar climate was like millions of years ago. 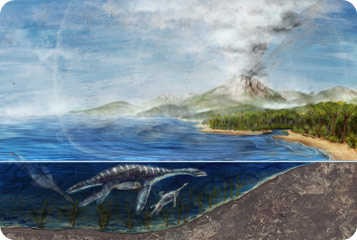 At both poles, researchers have uncovered the bones of huge marine predators that lived during the Cretaceous period, about 90 million years ago. In the Arctic, skeletons of crocodile-like creatures called champsosaurs have been found, while Antarctic seas contain fossils from the mosasaur, a predator with huge jaws and whale-like flippers, and the plesiosaur, a long-necked creature that resembles the mythical Loch Ness monster.

Scientists believe these monsters of the deep were ectothermic, which means that their body temperatures were always close to that of their surroundings. Researchers estimate that the Earth’s poles had a balmy average temperature of 57 degrees Fahrenheit during the Cretaceous, with even warmer summers — perfect for large, ectothermic animals.

What made the Cretaceous polar climate so warm? Scientists point to layers of ancient rock that indicate a long period of volcanic activity. On coasts all over the world, volcanoes spewed great surges of lava which covered huge areas and lasted hundreds of years. This process released lots of carbon dioxide into the air, which trapped heat in the atmosphere — a prehistoric greenhouse effect.

Also during this time, sea levels were at their highest point in the past 250 million years. With so much water and fewer land masses in the way, warm currents from tropical waters could reach closer to the poles — warming up polar oceans just enough for prehistoric sea monsters to flourish.