There’s a reason why an octopus always draws a crowd at aquariums — this eight-armed creature is considered one of the sea’s smartest animals. 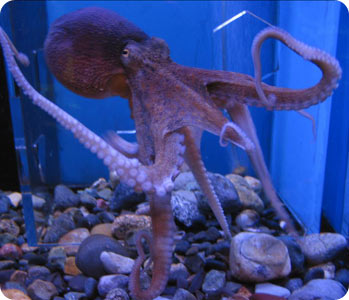 An octopus swims outside a plastic cube at Kuji Underwater Aquamuseum in Japan. An octopus can squeeze through any opening larger than its eye, including the cutouts in this plastic cube. Credit: Eve Astrid Andersson, wwweveandersson.com.

For their size, octopuses have the largest brains of any invertebrate, and stories of how they use these brains are legendary. Octopuses have been known to untwist jar lids to get at food inside. They are able to distinguish colors and shapes, and they use this skill to orient themselves to visual landmarks for navigation.

But experts are puzzled about why the octopus evolved such intelligence. Other highly intelligent animals, such as apes and humans, have long lives and complicated social relationships. But octopuses live only a few months to a few years, depending on the species, and they are solitary creatures.

One possible reason for this level of intelligence is defense against predators. Octopuses are mollusks, but they lack the protective shell of their snail and clam relatives. As a soft-bodied animal without this shell, an octopus might have to outwit its predators.

Another reason for higher intelligence might be the need to adapt to various environments. The tiny juveniles of some species of octopus drift through the ocean — there’s no telling what kind of habitat they will end up in by the time they settle down. These juveniles might need to use their brains to figure out how to adapt to a wide variety of terrains and hunt many different kinds of prey.

Scientists aren’t sure if adaptability is the reason for the octopus’s intelligence. But this creature’s remarkable behavior is sure to keep scientists in search of the answers.