When we think of the world’s biggest repositories of trash, we usually picture vast landfills. But thanks to the nature of ocean currents (and the indestructibility of some garbage), an area called the North Pacific Gyre has become known as the vortex of trash. 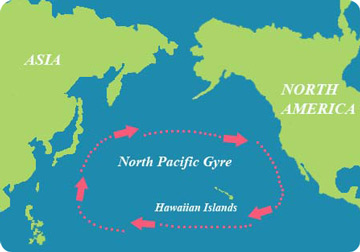 Ocean currents in the north Pacific circulate to form a gyre. Illustration courtesy of Mandy Calkins

A gyre is the area in an ocean basin where currents flow in a circular pattern. Because of wind energy, gravity, and the Earth’s rotation, gyres circulate in a clockwise direction in the northern hemisphere and counter-clockwise in the southern hemisphere.

In the North Pacific Gyre, which lies between the coasts of North America and Asia, the circular current moves more than just water. Fishing debris and trash from both continents are swept into the gyre and accumulate within the gyre’s eastern boundaries around the northwestern Hawaiian Islands.

Besides looking unsightly, this garbage threatens marine life. Fishes, seabirds, and whales mistake pieces of plastic and other trash for food. Plastic is a tough substance to break down, and many animals die when it damages their digestive tracts.

Regulations have reduced the amount of trash dumped from ships, and marine organizations have mobilized to clean up the waters inside the gyre. But, it’s slow going. A team from the National Oceanic and Atmospheric Administration removed about 21 tons of debris from the northwestern Hawaiian Islands area in 2006 — only a portion of the 57 tons the organization says accumulates there every year.

The ocean’s gyres can tell scientists much about how currents move. Unfortunately, they also reveal some ugly truths about where the world’s garbage ends up.