A Living Piece of Arctic History

Native Alaskan hunters made an incredible discovery during a bowhead whale hunt in May 2007. Embedded in the blubber of a 50-ton whale was a fragment of a harpoon dating from the 1800s. 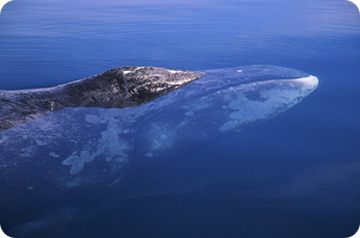 Bowhead whales have massive skulls that are curved in a distinctive bow shape, hence their name. Credit: Dept. of Fisheries and Oceans Canada

Scientists typically find it difficult to determine the age of whales, but in this case, they could put a time-stamp on the whale in question. Since the harpoon found in its body was a unique design, used only in New England from about 1885-1895, the whale must have been carrying it around for over one hundred years.

Bowheads are equipped to survive frigid environments. They can grow to 65 feet long, with layers of blubber up to 1½ feet thick and skulls strong enough to break through ice. Bowheads are baleen whales, which means they feed by straining millions of plankton through the baleen plates that line their mouths. Other than humans, the bowhead’s only predator is the killer whale, or orca, which will sometimes attack in packs.

Like many whales, the bowhead’s numbers were depleted by centuries of hunting. Now, Arctic fishermen are only allowed to harvest a small number of bowheads each year. But the bowhead’s small population and inhospitable habitat make it a difficult species for biologists to study. Unlike related whales, which migrate to warmer waters to bear their calves, bowheads spend their entire lives in remote, icy arctic waters.

That’s why the recent discovery of the century-old bowhead is so exciting for scientists: it’s a clue that this otherwise mysterious creature may be one of the longest-lived animals on the planet.