‘Little Girl’ with a Mighty Temper

When climate forecasters predict busy Atlantic hurricane seasons, residents on the east and Gulf coasts begin to prepare to face deadly weather. One potentially important factor in hurricane forecasts is the cycle of El Ni√±o (the boy in Spanish), and its counterpart, La Ni√±a (the girl). 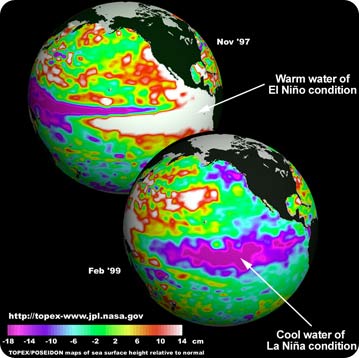 These two innocently named phenomena have a mighty impact on global weather.

El Niño and La Niña occur naturally about every 2-7 years when they change trade wind and surface temperature patterns in the tropical Pacific Ocean. During an El Niño event, weakened trade winds create warmer-than-usual waters in the eastern Pacific around equatorial South America, while water in the western Pacific near Indonesia is cooler than normal. These conditions bring wet weather and flooding to parts of South America, while southern Asia and Australia can experience severe drought.

Often arriving on the heels of El Niño, La Niña brings opposite effects: cooler ocean temperatures and drier weather in the eastern Pacific, with warm water and heavy rainfall in the western Pacific region.

So what’s the connection with hurricanes? Both El Niño and La Niña affect the movement of winds over the oceans, and La Niña can provide the ideal conditions for active hurricanes in the Atlantic.

When an El Niño event winds down, forecasters will always be on the lookout for La Niña to form and stir up Atlantic storm activity. If La Niña fails to appear in a given season, people on the Atlantic coast shouldn’t relax — hurricanes may form anyway. But if this girl does show up, she can make the storm season much more intense.