Long wavelengths of light such as red and yellow and very short wavelengths such as ultraviolet light (UV) get absorbed very quickly in water. As a result, the only light remaining in the deep ocean is blue. 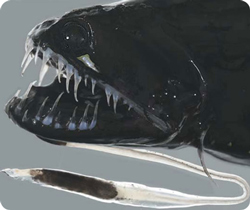 A black dragonfish about 5 cm in length. Notice the yellowish light organ below eye. Credit: Robin McPhee √± Australian Government Department of the Environment and Water Resources

Organisms are therefore adapted to see only this dim blue light, and most are colored red because the lack of red light makes them virtually invisible.

Many deep sea organisms such as some species of copepods, fish and squid can produce their own bluish light, and this is known as bioluminescence. It has many uses including communication, camouflage and to scare off predators. The light is generated by symbiotic bacteria housed within the larger host organism.

However, there is a group of deep sea dragonfish that produce light in the far red part of the spectrum where visible wavelengths are the longest. It is produced by light emitting organs called photophores located under the eye of these fish. This is unique because other deep sea animals don’t have the visual ability to detect red light or produce it. This gives these dragonfish a very distinctive advantage in the deep ocean because they can use the red light as a covert detection mechanism for finding prey and communicating with each other.

But the bacteria they house in their photophores are no different than those of other bioluminescent deep sea creatures. So how can they produce red light? Scientists have found that dragonfish have evolved a brownish colored filter over the photophores that absorbs the predominant shorter blue wavelengths before they leave the photophores, thus, only allowing red light to escape. This adaptation enhances underwater night vision — a perfect tool for hunting!