A Climatic Threat to Survival

Far above the Arctic Circle in northern Alaska, scientists are studying how global climate change is altering the ecosystem.Because they are frozen for most of the year, environments near the North Pole are especially susceptible to change, particularly to the worldwide increases in carbon dioxide and air temperature. 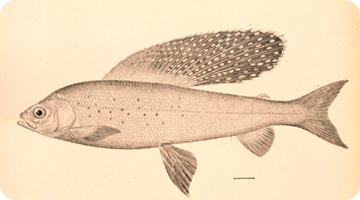 The Arctic climate certainly is cold, but it is more complex than that. Air temperature, ocean currents, wind, and ice all play a role in a delicate balance that determines not only temperature, but rainfall as well. Man’s activities elsewhere can alter the Arctic’s delicate balance which magnifies global warming, but also changes weather patterns.

Arctic animals have special ways of dealing with freezing temperatures, but small changes in climate and weather patterns can affect their ability to survive. For example, some fish spend summer in rivers and then, for winter, move into the bottoms of deep lakes, which don’t freeze. But the changing climate is making this annual migration impossible, because an extreme lack of rainfall has eliminated many of the connections between rivers and the lakes that feed them.

Arctic grayling is one of the few fish species that depend on this annual migration. Recently, adult grayling were unable to move into streams to spawn, and the year’s production of young was drastically reduced. Although the number of adults in the population remained steady, the loss of young produced in that year will likely have impacts on the population in the years to come. Beyond that, fewer adult grayling in the future means a reduction in a key predator, which could have cascading effects on this pristine and fascinating ecosystem.