Imagine an ancient sea creature with large, bulky scales, a pair of huge, menacing eyes, reaching over seven feet long and weighing in at over 200 pounds.  Now imagine this creature hooked to the end of your fishing rod.  As you begin to fight this monster, it leaps, repeatedly, out of the water to alarming heights.  Finally, after what seems like an eternity, the monster is subdued. 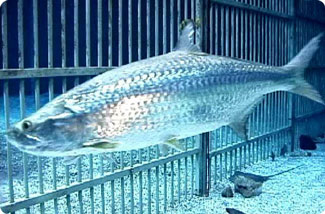 Well, it turns out this is no fairy tale. This experience was shared by thousands of people along the South Texas coast until the mid 1900’s. And the monster was no monster at all, but a fish called the tarpon. In fact, tarpon were so numerous along the coast that Port Aransas was formerly known as Tarpon, Texas. Franklin D. Roosevelt even came to South Texas in 1937 to experience this amazing display.

Tarpon were given the nickname “the silver king” by anglers because of the way sunlight reflects off of their large, silvery scales as they jump into the air. However, their mystique doesn’t end with their appearance. Inside the swim bladder of a tarpon are spongy patches of respiratory tissue, much like that in our lungs. This unique tissue, along with an unusual passageway between the swim bladder and esophagus, allows tarpon to breathe air. Typically, a fish’s swim bladder is used for buoyancy control, but tarpon also use it to breathe in low-oxygen waters, an advantage over other fishes of their size. This bit of information is helpful when trying to locate tarpon as they are typically seen rolling at the surface gulping in air.