The Hidden Weapon of Hurricanes

People tremble at the sound of its name, “hurricane.”  Last year, monstrous hurricanes, one after the other, battered the Gulf Coast with their menacing power. 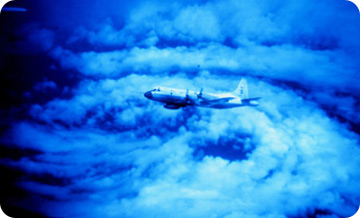 Katrina had more power than thousands of Hiroshima atomic bombs combined. Where do these hurricanes get this enormous energy?

People often think the devastating wind of a hurricane is the major form of its power. In reality, wind energy is only a small part of the total energy contained in hurricanes. Hurricanes possess a powerful hidden weapon. Most hurricane energy is released to the atmosphere in invisible form: latent heat.

Heat energy taken from warm tropical waters through evaporation is released back to the atmosphere through condensation of water droplets in the sky. Just as we feel cool when summertime breezes evaporate the perspiration from our bodies, the ocean surface cools down by a couple degrees along the hurricane path due to this evaporative heat loss and churning colder waters below.

Energy that is released becomes more ominous when the water vapor finally forms those fierce, dark cumulus clouds in the sky. So, the warmer the sea, the more latent heat can be transferred to the storm and the more powerful a hurricane can become.

Fear of hurricanes by human beings has a long history. Ancient Caribbeans called them “Hurican,” a god of evil, and the Mayans referred to them as “Hurakan,” a creator god who brought a massive deluge. There is no doubt that hurricanes have been one of the most powerful and destructive forces on earth for ages.