The “golden shadow from the lagoon” has returned to the Texas coast. Though not as well publicized as the fabled Loch Ness monster, this mysterious life form has plagued our coastal bays for more than a decade. 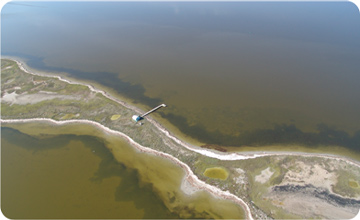 The “golden shadow” actually refers to the microscopic plant Aureoumbra lagunensis. This single-celled, golden-brown plant can reproduce so rapidly that it changes the color of the water and such blooms are commonly referred to as brown tide.

Brown tide is very harmful to the environment, and blooms can be so dense that they block sunlight from reaching the seagrasses that live on the bottom of the bays. Many fishes use these seagrass beds as a source of food and habitat for their young. As the seagrasses die from lack of light, the coastal ecosystem deteriorates.

Brown tide is remarkably well suited for survival on the Texas coast. Each individual brown tide cell is covered with a mucus layer that protects it from extreme fluctuations in salinity, which are common in our bays. Such drastic salinity changes are known to kill many other marine organisms. This mucus coating may also prevent tiny animals from feeding on the brown tide by making it harder to digest.

Scientists have been studying brown tide for more than a decade. Yet, the cause of these blooms remains unknown. As we learn more about this puzzling organism and what fuels its growth, we may be able to prevent this lurking monster from appearing again. In the future, brown tide may be only a golden shadow in our memories.